Posted by Community Archaeology at Wednesday, April 29, 2020 No comments:

Working on a site over the border in Somerset this week and this came up under the digging machines bucket: 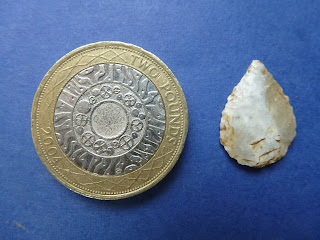 Probably Late Neolithic. Which just goes to show that one must always keep ones eyes peeled!
Posted by Community Archaeology at Saturday, September 14, 2013 No comments:

Is life boring? Ditch it!

I've been working on a site the last couple of weeks, an evaluation, and we have come to the conclusion that it is a Roman-British fortified settlement; quite rare in Somerset.

We have cut through two large parallel defensive ditches, 4m wide by just under 2m deep: 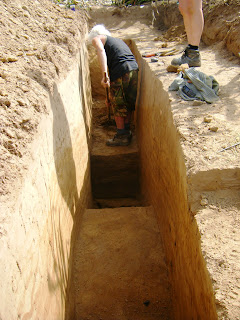 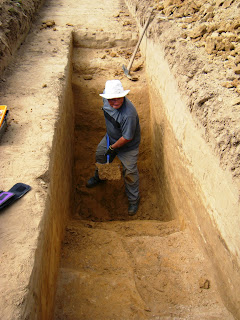 We had RB pottery from the covering material and ditch fills, as well as some slingshot: 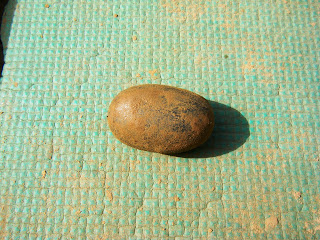 The Durotriges were famous for their skill with the slingshot and so were recruited into the Roman army. Unfortunately they ended up in hot countries in the middle east!

With careful excavation one digger found marks in the bottom of his trench: 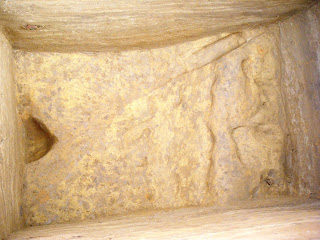 This was made by a dolobra, an entrenching tool very much like our own mattock: 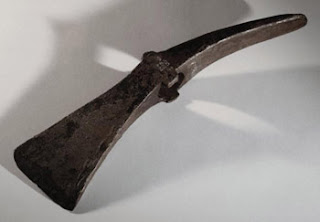 Another nice find was a flint scraper or knife with evidence of wear on the edge: 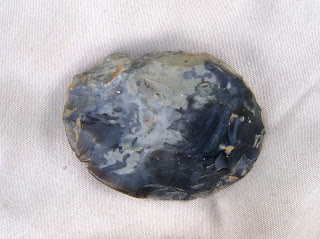 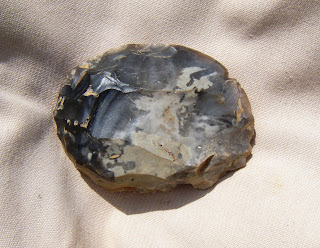 It fits nicely in the hand and is Late Neolithic: 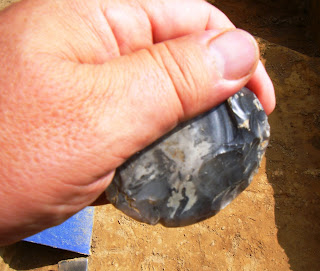 We are hoping that the site will go to full excavation and we can uncover the full extent of the defensive settlement and earlier features.
Posted by Community Archaeology at Friday, September 06, 2013 No comments:

Not a lot came out of the site I was digging during July, as regards finds that is. But we did have an opportunity to do some reconstruction work on the Bronze Age house and this is the result:
We stuck some metal pegs into the postholes and tied some wooden posts to them. My rather crude drawing shows that the posts formed a rather interesting pattern:
I thought at first that the entrance was NE, but it is possible that it is facing south and that the triangular shapes are there to hold up a raised platform inside the building.

All-in-all it was worth the effort. The rest of the site was ditch digging with little reward, apart from a B/A loomweight and some rather cruddy pot, one with finger marks on it, which was nice.
Posted by Community Archaeology at Thursday, August 08, 2013 No comments:

I have been digging for the past few weeks and the heat and flies have got to me. More posts soon - promise.
Posted by Community Archaeology at Tuesday, July 30, 2013 No comments:

I have been volunteering for the Portable Antiquities Scheme for the last few weeks. This scheme was set up in the UK so that people could take artefacts to a professional Finds Liaison Officer based at local town councils. FLOs work mainly with metal detecting clubs recording finds from their meetings, but also individuals. I wanted to fill gaps in my knowledge regarding metal finds and coins, the sort of things that come up rarely on archaeological sites.

Today I was working on Roman coins, such as this 4th century numus example of Valentinian (364-378 AD): 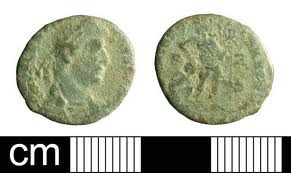 Then it was forward in time to this silver half groat: 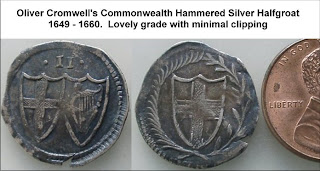 The obverse has the shield of St George within a palm and laurel and the reverse is co-joined shields, St George with that of Ireland.

But it is not all coins. This example of a little dress fastener is very similar to the one I was working on (1550-1650): 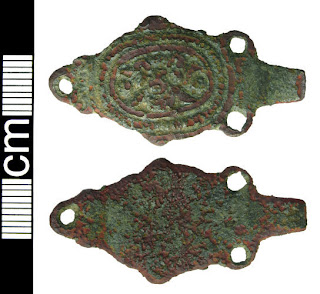 Sadly I will have to miss out for a couple of months at least to work in the field, but I will look forward to helping the PAS once more in the autumn.