For the 6th session of 'Digging the Dirt' I talked about the site opposite Spitalfields and dug in 1998-9. The site was located between the tracks of Liverpool Street station and the main N-S road of Norton Folgate.


It also lay on the Roman Ermine Street that led to Lincoln and York. The only features from the early period of Roman rule was a ditch which contained pottery of the 1st century and bones of various animals, including a mouse, vole and frogs and a timber-piled building with a clay-lined pit. From the pit came a miniature version of a Highgate C pot only 75mm high.

During the later period of Roman rule structures related to a cemetery, some of which had grave goods. One child burial had copper-alloy bracelets buried with them.

The area became increasingly boggy due to the Walbrook just to the east and a lack of drainage. There was no evidence of Anglo-Saxon settlement here, but the land was owned by the Bishop of London and then Walter Fitz Ailred (1190-1220) who founded St Mary Spital. Features included Saxo-Norman rubbish pits, some containing large assemblages of pottery sherds and horn cores, indicating industrial activity. A stone lamp was an unusual find.

The priory of St Mary Spital constructed a drain in the 13th century, but this failed to stop occasional flooding of the priory.

The existing buildings (some of high status, as evidenced by the building materials found) went out of use and the site was used as a dumping ground into the 16th century. But the area once again became a high status site after the construction of well made, brick buildings, one with an internal cess pit! No going outside into the garden during the night. Some of the buildings then became tenements and deteriorated into slums and brothels, with the poor and rich living mixed together.

This was a small site compared with other London sites, but told a story of an evolving area just outside the City, whose fortunes changed over the centuries and is now one of the busiest transport hubs in London mixed in with shops, offices and some rare Georgian buildings and lanes to survive into the 21st century. It is well worth walking around this area. One of the very few places where you can still feel the pasts presence seeping from the walls.

Posted by Community Archaeology at Tuesday, May 29, 2012 No comments:

The 10th June visit is coming up. If anyone who lives in Dorset is interested I can send a location map of the site. Meeting at 11am. £8 as per my students. Includes a tour of the town by a guide.
Posted by Community Archaeology at Monday, May 28, 2012 No comments:

The Ham Hill visit will be on the 19th of August, meeting at the site at 11am. As well as my present and past students all who wish to come along are welcome. The fee is £8 per person, the same as for the students. This is a rare opportunity to visit an excavation at a hill fort site, a scheduled ancient monument, being dug with the permission of English Heritage so as to obtain Ham stone for repairs to their properties.


Posted by Community Archaeology at Thursday, May 24, 2012 No comments:

In a previous session for 'Digging the Dirt' I described the site of Regis House, next to London Bridge, dug in 1995-6. This was my first introduction to deep stratigraphy and very scary it was, but also one of the best sites I have worked on.

The original crossing point for the Romans at the Thames was at Westminster and Watling Street heads in that direction. But they diverted north to cross at what is now London Bridge. Was there an Iron Age settlement at Westminster?


The most exciting part of working on this site was seeing what must have been the very first structures to be built for the very first London. These timbers are set into the bank of the Thames (c.80m from the present river) and date to c.AD 52. This is the start of London's first port.

The walls of the warehouses were executed in mudbrick with a daub covering keyed for a plaster finish, probably applied by a wooden roller.

In Bay 3 three lead ingots were found beneath an early floor. They weighed 170lbs and were stamped on the upper surface IMP VESPASIAN AUG and on the side BRIT EX ARG VEB or 'Britainia, from the silver mines'. They came from the Mendip Hills and lead is often found with silver. 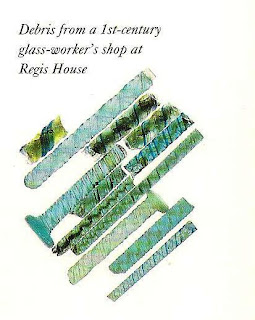 Bay 4 produced glass and may have been a workshop.

The Hadrianic in the 2nd century left its mark on the site. Many of the buildings were destroyed with fire debris being spread over the site.

The Thames at this point would have seen traded goods from all over the Roman Empire and linked Britain with it. Goods would have been wine from the Med, pottery from Gaul (France), lamps from Italy with fish sauce and olive oil from France and Spain. In exchange lead, tin, wool, corn and slaves would have been sent across the channel and south across the sea.

This truly remarkable site had to be destroyed by machines after we had dug it and it was heartbreaking to see. If enough money had been put up it could have been presented to Londoners and tourists as much as the Rose Theatre on the south bank is still. The very early date demonstrates the importance of the riverfront from the very beginning of London as well as the first London Bridge crossing.

Other pictures from MoLAS 96: Annual Review
Posted by Community Archaeology at Wednesday, May 23, 2012 No comments:

For the 5th session of 'Digging the Dirt' I talked about the 1996-7 excavation I was on at Great Dover Street, London. This site lay on the route of Roman Watling Street with burials and structures associated with it. 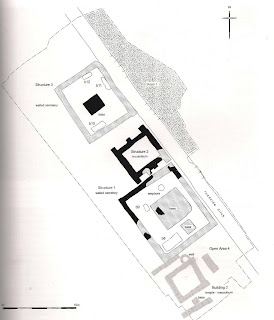 The primary structures were part of a cemetery set out in the mid 2nd century, including a temple-mausoleum (B2) 8m x 8m and set back from the road. A central cella was surrounded by a wall with an integral well and a base for probable altar. 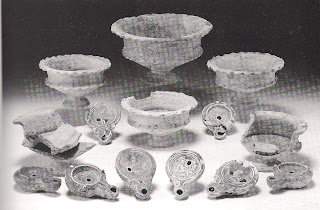 Associated with this structure was a pit, or bustum, used in the cremation process, the remains being of a woman. The finds were a remarkable collection of pottery tazze and lamps, these having images of the Egyptian deity Anubis and one with an image of a gladiator. The soil samples taken showed a collection of uncooked plant remains, mostly from the Mediterranean, with the image of a feast being laid out for the woman's journey to the underworld. 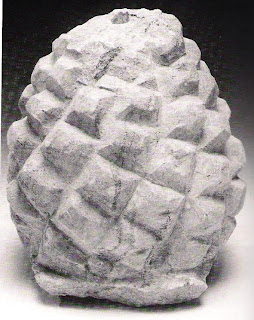 Between the mid 2nd and 3rd centuries three other structures were built closer to the road. One had a centrally located foundation, probably for a tomb and nearby was found an amphora buried upright and contained nails. This may have originally been used for libations during rituals. Within the rubble of this building was unearthed a carved pine cone along with moulded cornice fragments. A bearded god of a possible water deity was made of oolitic limestone, probably decorating a funerary monument. 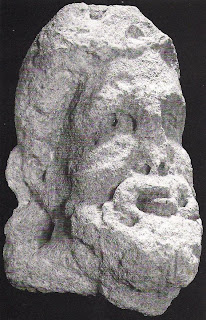 One find was of particular interest to me. It was a ceramic tettina, an example of which I found at a site at Dagenham some years before. 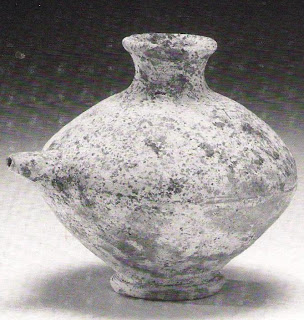 There is no definitive answer as to what they were used for (as far as I know-any answers?), one suggestion being that they were 'weaning' cups.

These structures were associated with a number of inhumations and cremations, some of which held lovely glass vessels, pottery (a fragment had some graffito on it - IIIIXXX = 34) and lamps.

These structures show that high class mausolea were used by private wealthy families over a number of generations running parallel with Watling Street leading into London. This site is a great help in adding to our knowledge of cemeteries surrounding London during the Roman occupation. It also showed how the Romans built roads to last. It took two of use several hours to cut a slot through it, by hand!

All illustrations from Archaeology Studies Series 4 (Tony Mackinder) MoLA.
Posted by Community Archaeology at Tuesday, May 15, 2012 No comments: 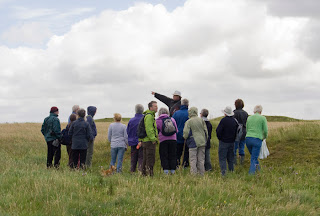 This coming Jubilee stride out into the Dorset countryside and see sites that have been gracing our landscape for far longer than 60 years.

On the 4th of June will be walking the Dorset Ridgeway to see the Hell Stones, The Grey Mare & Her Colts, Kingston Russell Stone Circle and an Iron Age settlement.

The 5th of June will see us visiting the Neolithic Dorset Cursus, the Roman Ackling Dyke and the Bronze Age Oakley Down roundbarrow cemetery.

Location maps will be sent via email when booking.
Posted by Community Archaeology at Friday, May 11, 2012 1 comment: