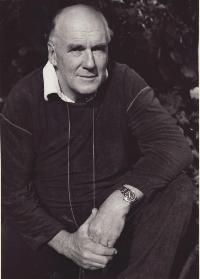 It is with great sadness to read that Philip Rahtz has died aged 90. A self-taught archaeologist with no degree or Dr before his name, he was first and foremost a digger who nonetheless had a huge impact on the subject during his years excavating, publishing reports and also popular books. He was dedicated to communicating his work and the importance and relevance of archaeology when he wrote: "Not only is archaeology fun, highly educational and intellectually satisfying, it is also crucial to human survival". He was also typically an archaeologist that reinforced the eccentric stereotype, which is also my experience. Being a naturist he had a large nude picture of himself in his flat, and he was inclined to greet people at his door in the same manner. His long suffering partners had to put up with his many affairs. I would recommend his books to those looking to introduce themselves to the subject. As un-stuffy as himself and a good read too. RIP.
Posted by Community Archaeology at Saturday, July 30, 2011 No comments:

To all you local Heritage Hunters - I have a website being developed and it will go online very soon. I will still be doing my 'locals' walks but I am now looking to expand and take tourists around our wonderful sites. I have been talking to local B&B's and they are very interested in linking up with my heritage walks, to bring in weekend visitors to Dorset. I will be posting details of the website a.s.a.p. I am calling it 'Archaeotreks'.
Posted by Community Archaeology at Thursday, July 28, 2011 No comments:

This years festival runs from the 16th - 31st July and to find out what is going on in your area go to http://www.archaeologyfestival.org.uk/.
Posted by Community Archaeology at Tuesday, July 19, 2011 No comments:

This is a contemporary rehash of a concern for skills shortages in archaeology that has been going on for some time now. Look at the BAJR for many examples of threads on this subject. Skills are being lost all the time due to undercutting for contracts, a lack of training (I started in 1990 and never had a days training - all learnt on the job) and archaeologists coming cheap. Diggers are laid off once to often and go and do something else instead; if you want to buy a house and/or have a family it is all but impossible to carry on in the job; archaeology is unregulated, in that anyone can set themselves up as an archaeological unit; many diggers are now forced to be self-employed and lose sick pay, holiday pay and unionisation protection.

Mike Heyworth of the CBA states that there has been a 7% reduction in professional archaeologists - surprise! No one who leaves college with huge debts wants to live like a student for the rest of their 'career'. Archaeology needs to be regulated and move to chartered status. Developers rule the roost at the moment and archaeology is a very small percentage of their outlay when developing a site (we worked out that on one site the archaeology cost the equivalent of three windows in the new office block!). As multi-skilled professionals we should be paid professional rates, not arriving on site to be laughed at by labourers taking home better pay.

The film also talks about volunteers. The reporter obviously knows nothing about the commercial world of archaeology. Volunteers can never dig a commercial site. Diggers need to be on site 5 days a week, for months. Professional diggers work 12 months a year (if they are lucky). But we need volunteers to get involved, learn about the job and what it entails, and support professionals politically from those that want to turn the clock back and have our heritage destroyed without record as it was before PPG16. This is not a war between volunteers and professionals, as some would like to see it. We need them united to fight for our past.
Posted by Community Archaeology at Monday, July 18, 2011 No comments:

﻿My next walk is at Eggardon Hill, one of the most stunning monuments in the UK in terms of preservation and location, with wonderful views of the countryside and coast. On the map you will see a crossroads opposite the hillfort with a very convenient lay-by. Plus there is a great example of a 'disc' barrow with added mound - very rare. 10.30am as usual.
Posted by Community Archaeology at Thursday, July 14, 2011 No comments:

Wednesday saw Pam and I at The Olive Tree with my students for the end of term dinner. We had the Calzone Vegeteriana filled with tomato, mushroom, pepper, artichoke and mozzarella - thanks Stef. A very entertaining evening with students from other courses. I am now working on my next course on 'Dorset Archaeology' begining in September.
Posted by Community Archaeology at Thursday, July 14, 2011 No comments:

If you do not have my email address please leave comments in the box provided. I hope to have a website up and running soon.
Posted by Community Archaeology at Monday, July 11, 2011 No comments:

Love Learning students Claire, Dave, Gary and Julie at the Hell Stones
﻿So it was back to normal for an evening visit to the Hell Stones - gales and rain. We cut down the distance to walk and used the stones as the shepereds used to do - for shelter. You have to imagine five bedraggled and windswept Heritage Hunters sitting under several tons of stone, our feet in mud, talking about long barrows. As we arrived back at the lay-by I assumed that they would want to be off home a.s.a.p. But no. "Lets go the Hampton stone circle", said Julie. So off we went into the storm. I shouted out some information until Dave took pity on me and said "lets not put him through anymore of this" and we all tramped back to the cars.
"That was a really enjoyable evening Chris, despite the weather.  In fact it enhanced the atmosphere somewhat.  And I think we all displayed a high degree of moral fibre!" Thanks Dave.
I would like to thank the students for making the last few months so enjoyable. Boundless enthusiasm and good company made this the best course yet for me.
Driving to pick up Pam from Yeovil the rain turned to a torrent. But the late Bruscetta and cappochino at the pizzaria cheered me up.
Next walk is Eggardon Hill. Details to follow.
Posted by Community Archaeology at Thursday, July 07, 2011 No comments:

The Hellstones
Tomorrow night at I am showing my students the Hellstones above Abbotsbury village. We are meeting in the village then going up by car(s) to White Hill, then along the South West Coast Path heading east to Portesham Hill. If you wish to come along please be at the village by 7pm opposite the tea shop. Limited parking here. Back before 9pm. As this is part of my evening adult education work I have to charge £10pp as half goes to Love Learning. Hope to see you there. ﻿
Posted by Community Archaeology at Tuesday, July 05, 2011 No comments:

The Grey Mare looking a bit sheepish.
The Grey Mare with mound running left.
Much to my relief, and the Heritage Hunters who turned up, my walk to the Grey Mare & Her Colts was undertaken in dry and sunny weather. I was beginning to feel jinxed. However, I will put a map on my information from now on, as a couple of people had difficulty finding the lay-by (as I feared). Lesson learnt. My partner Pam did a spendid job directing a couple of HH's, being stationed at the junction just down the road with a clipboard!

We set off along the track to the GM&HC and took in the c.5,000 year old structure that has been standing in this field observing the passing of time almost beyond our imagining. One of around 22 tumuli existant within the Abbotsbury parish it is Dorset's finest megalithic chambered long barrow. Including a stone chamber, facade, peristaliths (small stones around the edge of the long mound) and disturbed mound of stones it has been knocked around some what over the last five millennia. The giant capstone of the box-chamber now sits at an angle, but it must be many tonnes in weight, so not surprising it has slipped. It is a matter of speculation as to the rites carried out here so long ago. But humans are humans and the importance of the past and the deceased ancestors must have had something to do with it. These tombs would probably been open for some generations, as rites and celebrations were carried out along with the, literal, presence of the ancestors before they were returned to the dark interior of the monument.

I took away with me the effects of an insect bite, which resulted in my right arm now looking as if I am wearing a childs arm band, the ones they wear for swimming. It itches and aches at the same time. If the other one had been bitten as badly I would now look like Popeye. So a warning - always keep covered up against flies and ticks when walking in long grass, no matter how warm the day. Older people and children can have a very bad reaction to such bites.
Posted by Community Archaeology at Monday, July 04, 2011 No comments:

During the Festival of British Archaeology 2011 a new excavation is to be undertaken by the Association for Portland Archaeology. They are hoping to find artefacts from the Mesolithic to Roman and perhaps Anglo-Saxon. Please contact them if you are interested in taking part or visiting.
Call: 01305 861576
Email: apa@dsl.pipex.com
Guided tours to the Culverwell site are also due to take place on the 17th, 24th, 31st July - 2pm-5pm.
Posted by Community Archaeology at Friday, July 01, 2011 No comments: