I took my students around Poundbury hillfort at the weekend, one of many situated in Dorset, this one being on the outskirts of the county town of Dorchester. When looking from the ramparts to the South Maiden Castle is clearly visible.

Previously known as Ponebury this is the conflation of the name Puna (probably a local landowner) and an earthwork or burgh. The site was excavated in 1939, 1966 and 1980 and it was found to be developed from an earlier Bronze Age ditched enclosure. It also had three roundbarrows from the same period, but only one survives, although a small mound situated in the eastern sector of the hillfort may also be a barrow.

Originally a univallete enclosure, a second was added and both were revetted in timber. In the later Iron Age this was upgraded to stone. Roundhouses were excavated in the Eastern sector and some of the storage pits also. Looking from the Northern rampart is is obvious that this side of the hillfort is protected by the very marshy ground and the river Frome just below. Taking into account climate change, this would be very much as it was in the Iron Age, but in dryer times this land would have been very fertile, with access to water from the river.

We also had a look at the Roman aqueduct, clearly visible looking West from the rampart: 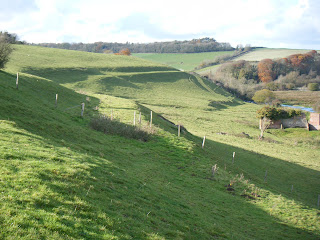 This picture is of the last of three aqueducts constructed by the Romano-British authorities. The first did not work, due to the incline being wrongly engineered and thus the water did not flow, the second did work and this third excavation was never finished. As can be seen it followed the contours of the valley and brought in 5 million litres of water per day to Dorchester from the damed river Frome at Frampton, where this construction is still visible and where excavation found the dam workers huts. The construction of the aqueduct destroyed parts of the Northern rampart, but the hillfort was refurbished by the Romano-British  authorities, with the possible building of a temple next to the remaining barrow, this being visible as a parch-mark and not excavated. A cemetery is located to the East with the remains of mausolia and timber buildings.

In the modern era Napoleonic soldiers were held here and Brunel tried to push through his railway line, which would have finished off the destruction of half of the hillfort begun by the Romano-British. However, the formation of the Dorset Natural History and Archaeology Society saved the site and forced Brunel to build a tunnel!

In World War I a POW camp was set up here, the off-spring of the Napoleonic camp one hundred years earlier, and in WWII the Observer Corp dug a bunker next to the site and also had a camp.

When walking ones dog on a sunny day, as it was on our visit, it is remarkable that this part of Dorchester has been used in various ways for over two thousand years.
Posted by Community Archaeology at Thursday, November 22, 2012 No comments: